He was in hysterics shouting and laughing at the same time, his funny little face smiling up at us as he beckoned us into the cold County Clare waters for the famous Pollock hole sea swim.

“Rub the sea water into the back of your neck”, he said it will help you get used to the cold.

I had met this very pleasant chap less than a minute earlier as he power walked over the uneven slippy rocks.

He had said good morning, asked us had we ever visited the Kilkee Pollocks, told us how excellent they were and how much he loved swimming here, then introduced himself as Patrick.

Others were taking their time on the uneven surface of the 300million-year-old rocks, checking every step.

Confident Patrick had maneuvered comfortably past us, with the finesse of a ballet dancer and as sure-footed as a rocky mountain goat.

Patrick got to the water’s edge, whipped off his t-shirt then splashed a handful of seawater across the back of his easily 70-year-old neck, before taking a brave jump into the chilly Atlantic ocean.

This guy was a pollock swimming veteran by the looks of things.

This whole adventure had started the day before with a road trip west from Dublin along part of the famous Wild Atlantic Way.

Kilkee was the first stop on our 7-day road trip adventure, travelling along the County Clare coast.

We headed North up the Wild Atlantic Way through Doonbeg, Spanish Point, Lahinch (for a surf), turning right up through the winding roads of the Burren National Park before finishing with a stay in Galway.

The goal was to have a very active break, explore, hike, swim, workout and enjoy the coast with some tasty Irish treats along the way.

Kilkee had been recommended to me as a superb spot for coastal hikes, which it most certainly is, and the main reason we chose the popular seaside town as the first stop.

Our first evening had been spent exploring the small seaside town, its music, and pub scene, a very funny night indeed with a sing-song and perfecting my Irish Jig.

We had planned an early start on day two and managed to get a reasonably early night, dancing our way into the B&B before midnight.

This meant we were up at 6 am full power for a morning workout on the beach, and our Pollock hole sea swim, to awaken the senses. 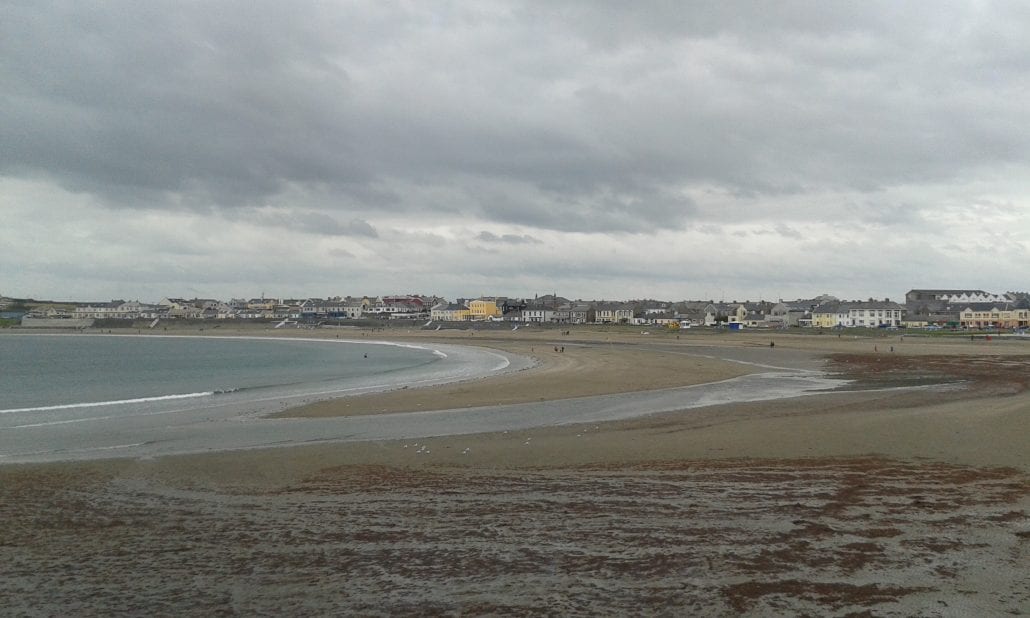 Kilkee’s large sandy beach offers a handy place to set up for a workout with firm golden sand, or the promenade area is spacious for bodyweight training and running.

On this day it was a superb location to train at sunrise, a very fresh morning.

The tide was out, so after some bodyweight HIIT we finished with beach sprints on the wet sand.

Training in the great outdoors and exploring new places to train is one of my favourite things about travel.

As a fitness world explorer destination, Kilkee has an abundance of things to do.

A ready-made sprint track and nature made cryotherapy pool to soothe the muscles!

The pollock holes are easy to find, take a short walk from the beach and town, walking up the road towards the coast path you will come to a car park and cafe, this is where you will locate the ancient pollock holes sea swim.

If in doubt follow the crowds, or listen for the gasps and shrieks as people enter the water.

When the tide is out it reveals 3 large natural tidal swimming pools, on the first day we visited even though it was cloudy the water was crystal clear.

It’s hard to describe the spectacular setting of the pools, with the cliffs surrounding them and the beach behind, so I will just describe them as awesome and hope my beginners travel photography does them justice. 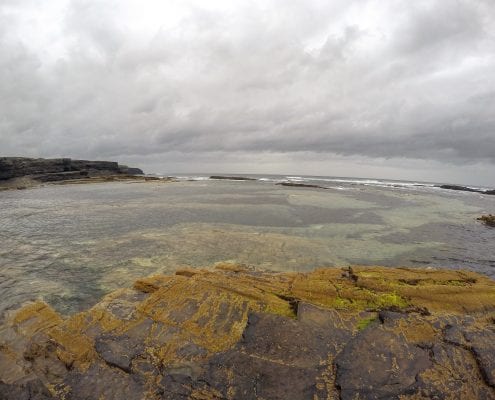 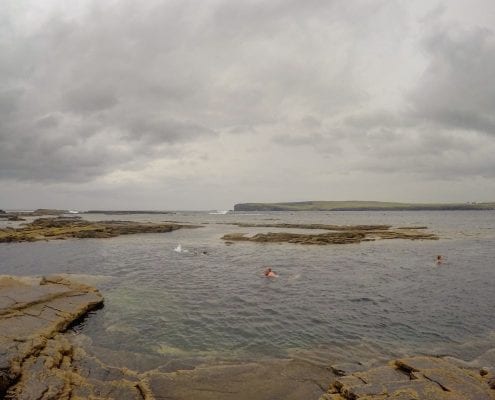 Anyway back to the swim, Patrick was continuing his banter and laughing at everyone entering the cold water.
I answered back in a very deep voice, thanks for your kind advice Patrick but I’m used to this kind of thing, I’m from Cornwall, he chuckled again as he floated along on his back.

On the count of three, cheered on by Patrick and a small crowd we both took a jump into the pollock pools.

Wow…… it was very cold, colder than I had expected, maybe I should have taken his advice, it was definitely a few degrees cooler than the sunny Cornish coast only three weeks earlier.

I took a deep breath and relaxed on my back to let the sudden shock subside, something you are taught as a kid living by the coast, but also something I had seen Patrick do and he was still alive and smiling.

Sure enough, once we had been in for a minute or two it felt invigorating and the spectacular surroundings further invigorated the senses. 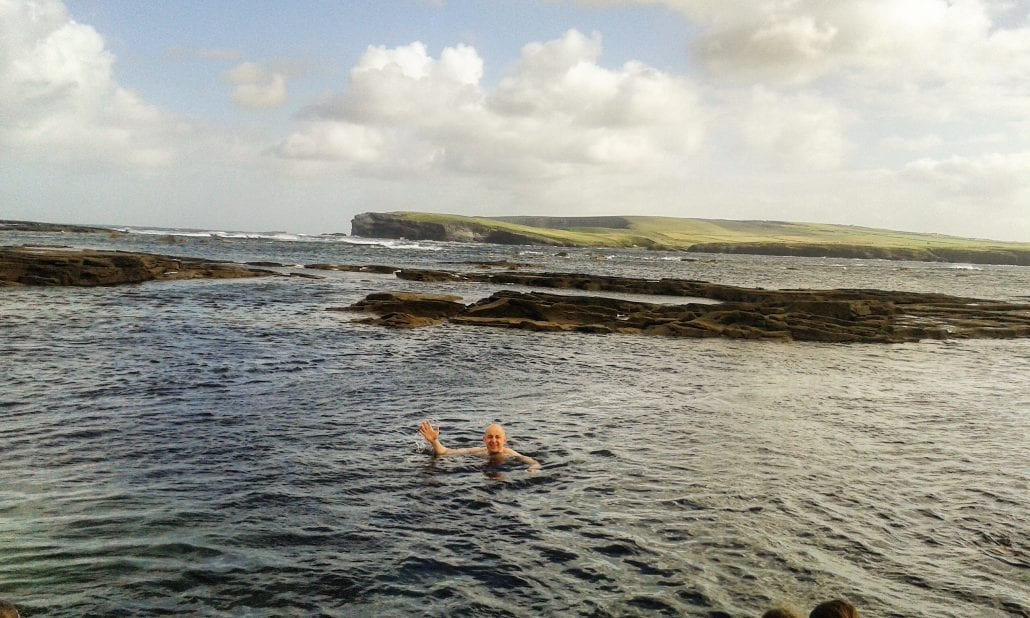 Freezing but worth it!

What an incredible place, the tide was out and all three of the main Pollock pools were being used by fellow sea swimming adventurers young and old.

It had been a few weeks since I’d had a good swim in the sea, so it was great, especially after the morning workout, Guinness and dancing the night before.

We had both agreed prior to our swim on a Pollocks pact, we would do at least 15 minutes to get a proper swim, which would then make us worthy of a hot chocolate to refuel.

As we floated along, hikers waved from the coast path above, and more people tiptoed across the rocks to enjoy swimming in this natural phenomenon.

I’m not exaggerating when I say, it was an absolutely amazing atmosphere down there. Everyone was chatting to each other, each time somebody entered the pools it offered entertainment and laughter for all.

The veteran locals and holidaymakers mingled and chatted with one another.

The children were exploring the rock pools with their nets, looking for small fish and crabs in the recently replenished tidal pollock pools.

We were true to our own promise to ourselves and ended up swimming around for 20 minutes.

After a quick dry off on the nearby rocks we made our way to the Diamond rocks cafe, the destination for our hot chocolate.

She wasn’t wrong, this place is seriously good, serving up body warming hot chocolate, teas and coffees to all.
They also serve up some awesome cakes, and huge food portions to refuel after your swim or hike.

Everything was so good on our first visit that we returned the next day after a morning trail run along the coast path, this time we sat outside relaxing in the warm sun with a coffee and cake watching people swim.

During my travels I have been fortunate to have some great sea swimming experiences in stunning locations worldwide, I’m now delighted to add the Pollocks to my list of worldwide wild sea swims.

Our wild swimming experience was made all the more special by the friendly crowd of locals and fellow explorers enjoying a fun, positive and active day in the great outdoors.

This is what travel is about, new places, new experiences, new memories and of course meeting new people.

It’s clear why the Wild Atlantic Way is voted one of the best coastal road trips in the world.

Dramatic landscapes, fascinating heritage and culture, as well as the world-famous Irish hospitality, made this trip along the Wild Atlantic Way an unforgettable adventure.

If you plan to visit the west of Ireland, and Kilkee isn’t on your list, add it now!

County Clare has many other wonders to discover, this was just a small part of the glorious coastline we saw. 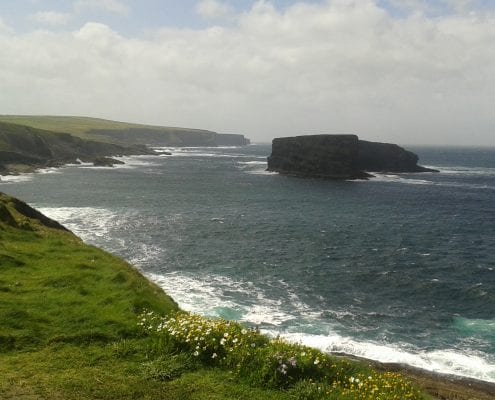 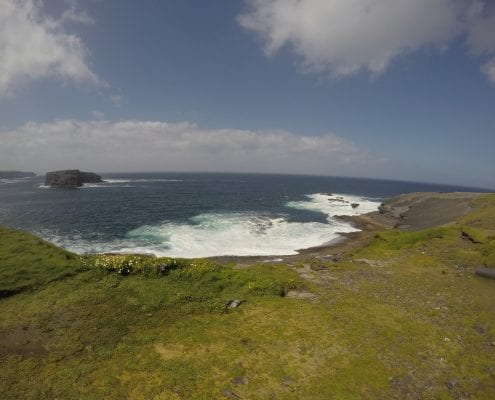 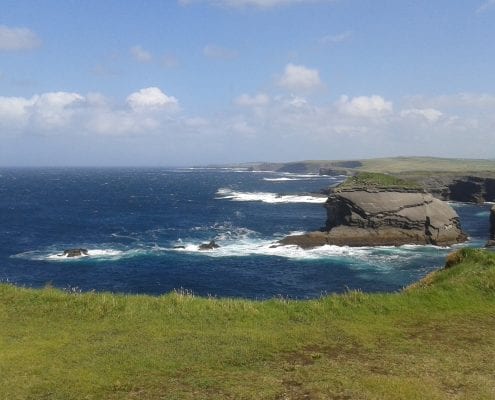 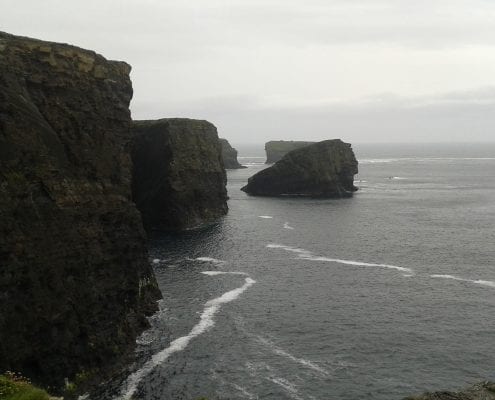 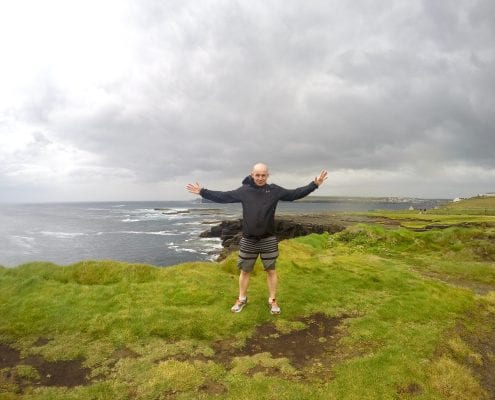 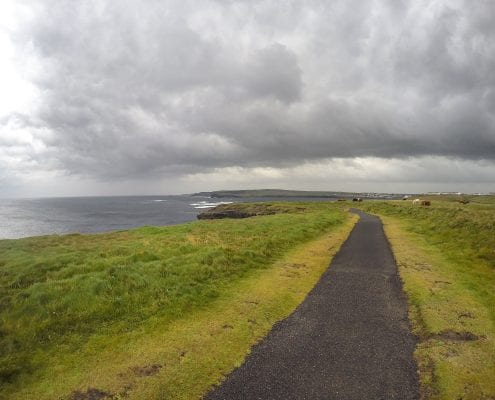 Time the tides: the main advice from locals was to visit here within 1 hour of low tide to get the best swimming experience when all of the main 3 Pollock holes and all of the smaller rock pools are exposed.

Watch your step: people were wearing those jelly type shoes to make walking on the rocks easier -maybe worth considering.

Take your snorkel: – I didn’t, but this was the advice from others in the cafe after our swim, looking forward to doing this next time.

Explore the surrounding coastline: Dramatic landscape is an understatement, the coastline is amazing and the coast path is excellently maintained for running or long hikes.
It reminds me of areas of the Cornish coast, adding to why I loved it so much.

Get chatting: go out of your way to join in and chat with your fellow explorers, don’t be shy.
It will really add to the experience, everyone is there to enjoy themselves and a little banter and laughter make it an even more memorable time.
We picked up some great tips for our trip from people we met down at the Pollock hole sea swim and in the cafe.

Take a dive to get the adrenaline pumping: If you’re feeling adventurous there are diving boards along the coast path as you walk back into town.

High tide was already far enough in after our swim so we added to the adventure with a few jumps from these on our way back, of course, make sure the tide is right and stay safe.

I half expected to see Patrick doing double backflips, but he must have been quick on his way home.

About the author
Lee Murrin
The Personal Trainer and Worldwide Traveller behind Fitness World Explorer.
He has worked in his passion as a Personal Trainer and coach for 16 years. His travels have taken him worldwide to 78 different countries on many adventures. He enjoys seeking out new adventures combining his loves of fitness and travel.
[email protected]

This error message is only visible to WordPress admins

Please go to the Instagram Feed settings page to create a feed.

Capri in a Day
Scroll to top